I figure I should probably put developments of the past two weeks or so into a more formal format - I tend to be rather too keen on the “doing” but lax on the telling, so let’s fix that shall we?

This post will attempt to lay out why this “Akkoma” has become a thing, what it intends to do, and why you should care.

But first let’s get an obvious question out of the way - “What is with that name?”. Back when the Pleroma developer split happened (more on that later), I started referring to my instance’s version of pleroma as a fork, half-jokingly. One of the most popular emoji sets on the instance is the Akko set: 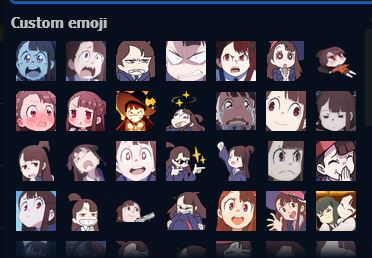 so I figured “yea it’s pleroma with more :akko:”. And I’m not changing the name now because I suck at naming and people know what it is now.

Akkoma is a mostly hard fork of Pleroma, with an intent to focus the massive blob of software into something with some actual identity.

Pleroma started out trying to be a small and efficient microblogging platform that could be hosted just about anywhere, but after many years of actually being used, it has slowly grown into something that isn’t any significantly lighter than misskey or even mastodon. All this whilst trying to cater to every possible use-case, which has led to it being a jack of all trades, not particularly good at anything, but it can do most things ok-ish.

We can’t reclaim that lost ground, so Akkoma is a fork that embraces that and tries to find something to do well. More on that later.

Why fork Pleroma in the first place?

As many of you will be aware, back in 01/2022, there was something of a schism in the smallish group of Pleroma developers with no single cause in my eyes - it was the culmination of years of mounting tensions between two competing interest groups. Pleroma has ever been an uneasy alliance between “free speech” people and free software people, and as the project’s creator aligned more with the former group over time, it was only really a matter of time before something acted as a catalyst to break the alliance.

I shan’t elaborate too much on that schism here, but the catalyst was one developer who both aligned with the “free speech” group and refused to treat other developers with any sort of respect (whilst being a generally unpleasant person to boot) - this broke the developer group in two and spawned the short-lived “newroma” (see, at least I’m not that bad at naming).

This fork never established any actual governance structure, and nobody took responsibility for it. Being led by a committee led to it having absolutely no vision, nor direction. Newroma died shortly after its inception.

Most of the developers that split off in the fork then went back to Pleroma, after a band-aid fix from the almost-never-present project creator.

I do not believe they have meaningfully reformed anything since the schism, and it’s naught but a power vacuum waiting for someone to take up the mantle of maintainer again - given the track record of the above, I do not trust that whoever ends up winning that power struggle will be someone I wish to side with.

Thus, I’m doing it myself. With blackjack and anime music.

Where do you intend for this project to go?

This is one of the most important questions you can possibly ask any new project.

My aim is to refocus pleroma. To give it an identity - a niche - not covered adequately by mastodon or Misskey.

This identity will be defined by focusing on user experience and expression as a first priority. I have watched in the past 3-4 years as a culture of personal expression established itself in the area of the Fediverse I live in, as custom emoji gained more prominence, as people moved to Misskey to gain access to customization, styling via MFM, and emoji reactions.

This has shown that people really care about how they express themselves on this federated network of ours - but a lot of this has been added via unofficial add-ons (absturztaube’s mod loader, that one Misskey signature mod) or poorly-thought-out additions to AP (the isCat Actor property). It’s time to embrace this officially and go all-in on allowing the customization of user experience.

To that end, my short-term roadmap for Akkoma includes things like user roles inspired by mastodon to allow for standard users to, say, modify the instance’s emoji to get what they want without asking the admin, and allowing any number of frontends to let instance admins give the widest possible range of options to their users, and so on.

I will also be changing a few of the axioms pleroma was initially developed with - no longer are we to assume that instances are small or single-user, instead each instance is a community in its own right, and deserves to be able to put itself across as such.

So yeah. It may not be the most defined direction as yet, but it’s somewhere to start walking towards. Better than newroma ever had, that’s for sure.

Where do I get involved?

Submit patches, raise issues, whatever you want. Unlike the actual pleroma maintainers I’m actually somewhat responsive. You won’t erode into a skeleton by the time your PR is looked at is what I’m saying.

You sure you can manage this?

I’ll give it my best shot. If I don’t, I’ll be admitting defeat and having to walk back into the arms of the “free speech” gang. That’s some motivation to succeed if ever I’ve seen any.