This post exists so I can use cards with youtube to issue post-publish corrections more visibly than in the description.

2:27 - "we're married after all". This comes from me misinterpreting 4 syllables that could have one of two meanings. You'll see both scattered throughout the comments.

1:58 - "are you actually doing that, or did you just want me to pay attention to you?". Comes from "komatte" and "kamatte" sounding VERY similar here

Aqua is (not) being considerate

Honestly I didn't think anyone would care to see what these mean. They're... essentially made-up and very vague. I used the localisation from the english version of the game here. 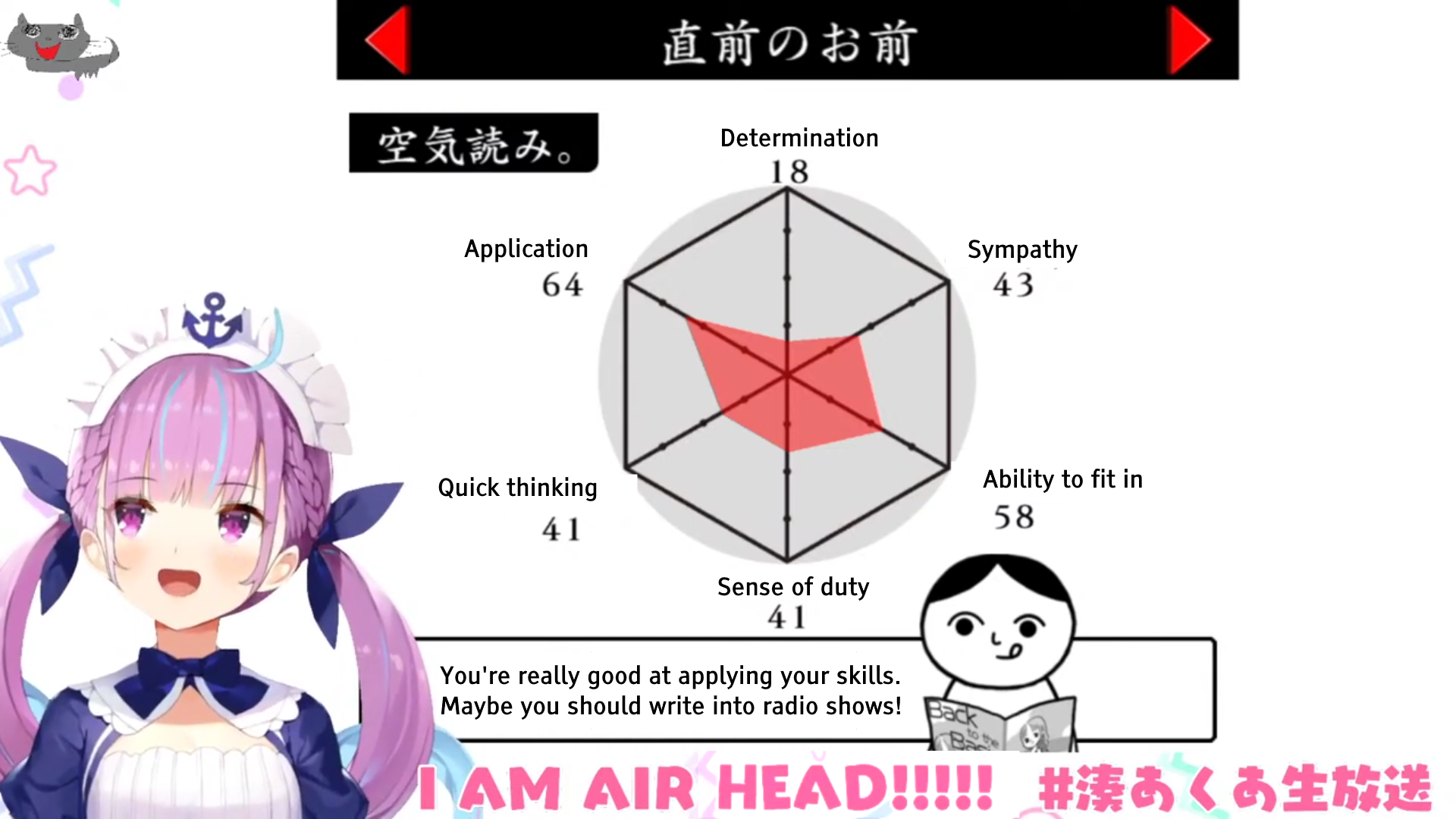 An Angel, a Dragon and an Elf walk into a bar...

this then affects 3:09 respectively

I made this mistake by incorrectly visualising the へ (direction of action) particle and which way it acts in this instance. In my mind if your 好感 were to rise へsomeone, they'd like you more. But this is incorrect. Should I have googled a phrase I was unfamilliar with? Absolutely.

I am lucky that in this instance the error only affects two minor lines.

I was also told by someone that knows their ginger beverages that "ginger beer" and "ginger ale" are totally different - although Kanata seems to use the same word for both. The barman is quoted as saying that "ginger ale" is in moscow mule, which it is not. Thus I used "ginger beer" throughout. There is a possibility that the "real" ginger beer and the "fake" ginger beer comment could have been referring to the difference between these two drinks, although the way Kanata quotes him makes it hard to justify any real redactions or corrections here. There was also someone in chat going "what does he mean 'real'?" so I think keeping as-is is justified. I could also flip all instances of "beer" to "ale", this would still have the effect of being "wrong" as far as the drink is concerned, but true to the speech.

In my view, the conversation would make less sense if Kanata orders a ginger ale and then the barman starts talking about the ingredients of moscow mule, which is not linked in any way.

I'll list things that I get asked a lot here.

How do I start learning Japanese?

Bear in mind that I'm just some N3 weeb (at time of writing), so I'm not a total beginner but I'm not really great either

At time of writing I've been actively trying to learn stuff for about 2 years, without formal education of any sort.

Take a look at the DJT guide - it's how i started learning in any proper fashion. , and most of it started there.

Throw those moonrunes at your eyeballs and ear holes until they cease to be quite so runic.

If you're here, you're probably into vtubers you can basically kickstart your listening skills by just watching streams and picking up absolutely anything you can.

Learn some basic vocab and grammar from either picking it up via immersion or from resource packs, then try to consume native content (e.g basic manga)

So, to paraphrase, to get started:

It will take years though. and it's a lot of work. Good luck.